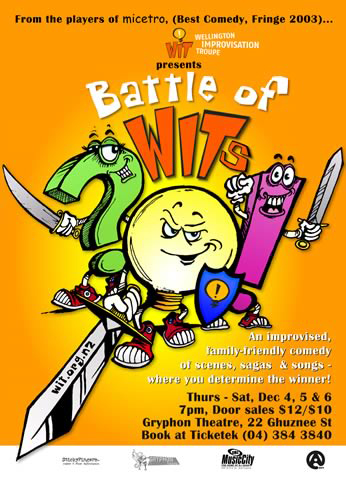 Three (sometimes more) teams of 2-4 people compete in a series of improv games and open scenes judged by the audience.  An MC keeps the show moving and acts as a director of last resort – but effectively the teams are in charge of themselves.

Ideally form teams well before the show and train together, so that when you are on stage you know how to make the most of each other’s strengths, and what will inspire each other.  Give yourselves a team name, pick a team leader, even create a cute little pose or chant to introduce yourselves.

Typically there are four rounds for Battle of WITs, with eliminations after the second round and (if more than three teams) before the last round –  the MC will manage to the time available and the number of teams.  At the end of a scene teams stay on stage, as the MC asks the audience to judge “was that a 1, 2, 3, 4 or 5″.  The MC may also arbitrarily add or deduct points for any reason at any time.

Teams who’ve been eliminated may still come on stage to be props or furniture or a transient marching army if called for, but just remember whose scene it is.