(Extracted from a Facebook discussion between Nicky Hill, Ryan Hartigan and various other WIT stalwarts)

Some say it started with Geoff Simmons in 2001, that he came from Auckland, with improv in his heart. There was already other improv happening in Wellington, with improv at the Indigo Bar and theatre sports at Victoria University, while The Improvisors had already been together for a decade.  Geoff’s Wellington branch of the Improv Bandits offered improv training, and classes started at the Community Education Centre.  Soon these began to foment Micetro shows.  An all-women collaboration, The Improv Divas, appeared in Sorry, Did I Muff My Line? at BATS in October 2002. 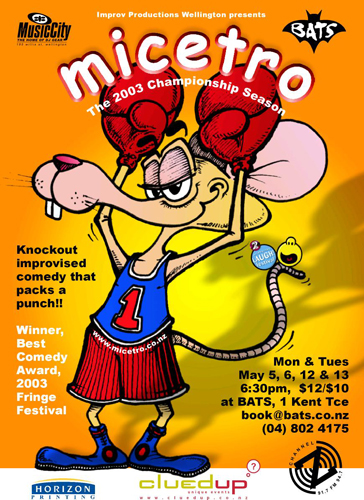 In February 2003, under the banner of Wellington Improv Productions, a Micetro won Best Comedy in the Fringe Festival.  These players were the core of the group that became WIT – initially they were known as “The Group with no Name”.  Geoff left Wellington, but the group came together and did a Micetro in May of 2003, at BATS Theatre. Barry Miskimmin was the producer.  It was a triumph!

Another Micetro season happened in July and the meeting that established WIT legally and created its first committee was held in August 2003.  The committee, Danielle Hodgson, Julian Wilson, Ryan Hartigan, Carmen Mak, Barry Miskimmin, Linda (a Treasurer who immediately moved to Hamilton), Anton van Helden and Nicky Hill, bravely took on the taming of the wild young brumby that was WIT. Nicky recalls the meeting as scrabbling to assemble the 15 members needed to make it legal. It was ” full of bureaucracy, plus several Mexican waves in lieu of seconding”. The name WIT had already been decided on, proposed by Anton van Helden, who also supplied our logo and artwork for the first poster. Peter Hodgson arrived, late but dressed in orange.

This Great Meeting followed weeks of informal meetings, including a critical one with the Constitution drafters Nigel Chin and Alistair Wishart, and the Coordinator incumbent Danielle Hodgson and Nicky Hill, which finalised the draft Constitution.

The first show season we did as WIT was Battle of WITs in December 2003, put together by Julian Wilson, Ryan Hartigan and Nicky Hill, with others like Danielle Grant and Pete Hodgson on comms making it happen.  Anton did the poster.  This first BOW season was at Capital E, five nights and pretty much sold out. We wore crowns and gowns.

Meanwhile, somewhere on a hill in Newtown around the establishment of WIT, Jules starting doing Thursdays, his own improv experiment, and this ended with players from that process such as Tai Samaeli, Paul Sullivan and Amanda Maclean joining WIT in time for our first season, without having to go through the bureaucratic journey that they otherwise would so have enjoyed.

Helpful early support came from people and places like Glyn McLean, then proprietor of Music City, and Capital E, giving WIT space to meet and train.