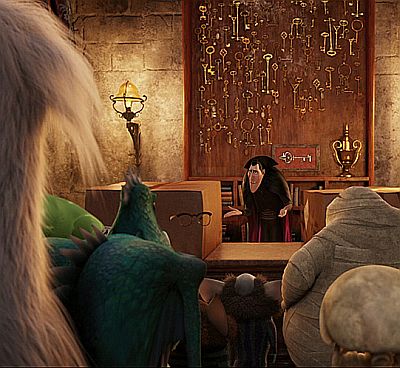 Establish characters with relationships, by checking into a hotel or a convention, and endowing each other. Five or more players.  Game shared with WIT by David Innes, of Melbourne’s Impro Box at the 2013 NZIF.

The first player comes up to an (invisible) hotel receptionist, and faces the audience.  They establish the location of the desk and where the receptionist is sitting.  Then they name themselves, why they’re at the hotel or event, before naming and endowing a subsequent arrival.  ["I'm Lady Fothersgill, here for the Taxidermy conference.  Has my assistant Snivers arrived yet? That wretched girl is always late, with more hair than wit"]. They take their room key and leave.

Each player arrives and leaves in turn, taking on board a name and character that has been set up, and building on it with their physicality and accent, perhaps adding some mystery (ie, a person described as sober checks in drunk).  They then create the start of the next character and leave.

As a class exercise, can be played very simply and straight, ie each person names the next person until everyone has been ‘created’.  Then break to the opening cocktail party.   As a show starter can be used to build complex characters for an audience to care about, as well as establish basic platform, before getting too plotty.  Ideal to start a ‘Murder Weekend’ type tale.