Pronounce as ‘Maestro’. Can be played with a fairly large number of players, typically 10-14 (although in a large venue some groups play with up to 20), an MC, a musician and 1 or 2 directors and a lighting operator. It is a game-of-a-game, with the players pretending to the audience that they are really serious about ‘competing’ with each other, although in reality everyone is working together to create a great experience for the audience.

In some shows the players are called by numbers, wearing big bold numbers on their clothes so the audience can see.  The person wearing number one will typically assume the persona of the “last week” or “last season” winner (real or not).

The directors choose for every scene the appropriate number of players, usually fishing name tags or numbers out of a hat. The directors explain the improv game to be played, may ask the audience for suggestions, direct and correct the scene.

After each scene or game the audience decides, by cheering and applause how many points the scene should be awarded, with one being for a not-so-good scene, and a five a scene that made them laugh and cry.  Each player gets as many points as the scene he or she played in was awarded, although the MC may give or deduct extra points for good or ‘bad’ player behavior.  Note the “Last Name” rule.  If a director *really* wants you to stop the mischief, they will use your last name.   So, “Billy, it’s time to leave the stage” means “Billy, carry on”, while “Smithers, time to leave the stage” means really go now this has gone on too long.

Also, *be happy* if your scene is awarded a one or two, your audience have judged you correctly!  The evening will be much more interesting than if every scene is given a three.   Also, this is not a fair competition. Because it is not a competition.

Once everyone has played in a scene (or more often two), the players with the lowest score take a bow and leave, and the whole thing starts again, usually with about five rounds in a one hour show. The directors ensure that (certainly with large groups of players) that there are more group-games at the start of the evening, and more 2-person scenes or even monologues toward the end of the evening.

This is a fun format that can be played with mixed bunches of experienced and not-so-experienced players. Since players are immediately judged, it is perfectly possible to loose a star player near the start.  Being eliminated doesn’t mean someone is out of the show: there will be opportunities to leap back on stage when there’s a need for a forest in the background, or a backing chorus for a rousing song.

In the end there will be one player acclaimed Micetro: this is the signal for all the players to return to the stage and admire the winner.

Typical games you might expect to see in a WIT Micetro

Word at a time
Speak in one voice
Epic poem or Wanky Poem
Experts – either Arms Experts or Deaf Interpreter
Musical rollercoaster, or emotional rollercoaster
Numbers of words (speaking in sentences the length controlled by the director)
Touch to talk
Song, sonnet sermon
Rhyming Couplet scene
Opera
Foreign Film
Death in a Minute
Scene ending in I love you
Songs on a topic of the audiences choosing (typically folk or rock ballads)

[adapted from The Improv Encyclopedia itself sourced from the original source of all things Micetro, Keith Johnstone's Impro for Storytellers]

Resources (or just make your own, these are just one guide) :
MC Sheet : Micetro Score Sheet_revised
Directors’ Notes : Micetrodirectorsheet 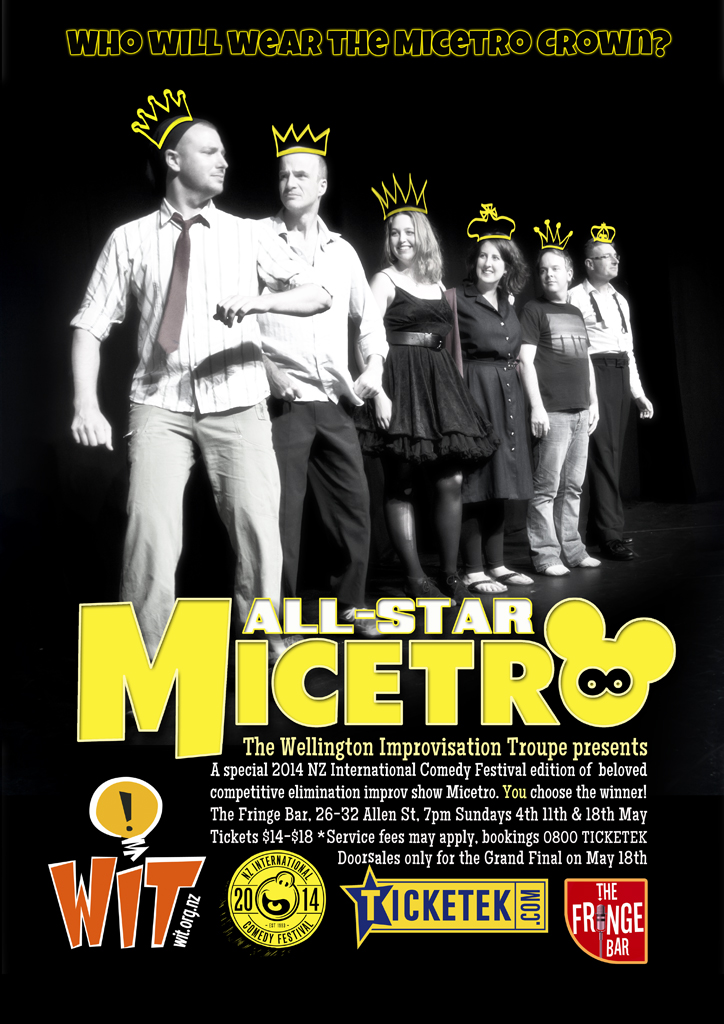